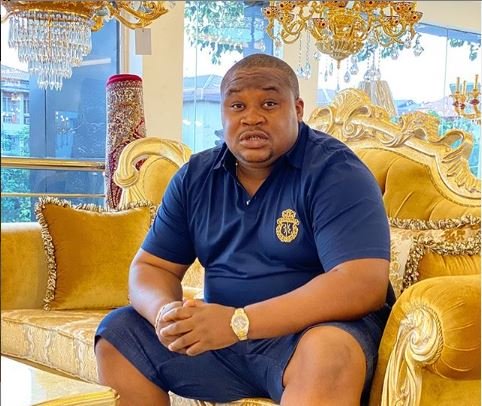 Popular Night life promoter, Cubana Chief priest has shared reasons why Davido needs to be given his due respect.

Trouble had started on Friday after Davido took to his Instagram page to declare himself and Wizkid as the two “greatest Nigerian musicians of all time“.

Burna Boy appeared to have reacted to Davido’s declaration when he hinted that the ‘OBO’ crooner’s achievements were largely influenced by his father’s prosperity.

Photo: Davido in crutches after sustaining…

Cubana ,born Pascal Chibuike Okechukwu,  shared reasons  why he thinks Davido deserves all the reverence he has been getting.

He wrote on Instagram: “Don’t ever fight destiny. You see this crown, it’s God that gave it to him. It’s natural, it’s inborn. David as someone from a wealthy background never looked out for a rich/blown girlfriend rather he blew his girl,” he wrote in a mixture of English and Pidgin on Instagram.

“David at 26 has a 5-year -old daughter. David with his said father’s money has raised talents to super stars even his gateman has benefited!!!!

“Were it to be your father that owns such money, pride would not allow you to do music for a living. David turned poor Ikotun boys to Island big boys, come on !!!! There are levels to this championship thing, na who blow come still blow people na him we wey be Igbo people dey call odogwu.”