Nigerian rapper and founder of rap group Trybesmen, Eldee has stated that he gave up on the country after realizing that it was far too gone for the kind of redemption he had sought.

Eldee made this known during an online question and answer session with his fans. He also spoke on leaving music and moving to the US.

He noted that although the decision to leave a thriving music career and move to the western world was a hard-hitting one for him, he has no regrets as everything eventually panned out well. 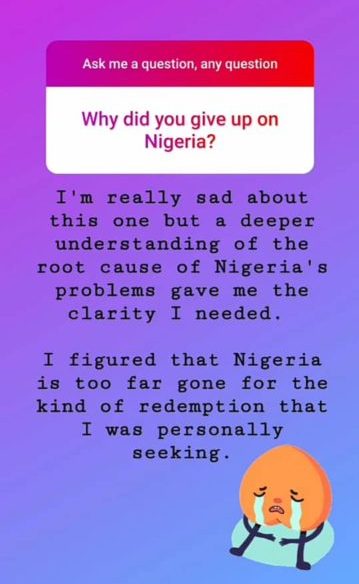 “I’m really sad about this one but a deeper understanding 0f the root cause of Nigeria’s problems gave the clarity I needed. I figured that Nigeria is too far gone for the kind of redemption that I was personally seeking,” he wrote in a series of posts on his Instastory.

“The decision to quit a thriving music career and leave Naija for good is the most difficult and impactful decision I ever made. Honestly, it was just time to move on.

“I felt it was just time to hand the baton over to the next generation and proud of what they’re doing with it. It’s very easy to become an agbaya… look at our politicians.”

“Never stop fighting for a better life. Leaving Nigeria is one of the many options you have but it shouldn’t be the only option you pursue. I did well in Nigeria and I know many people who still do,” he added. Nollywood can save us all- Eldee

How I contributed to the decay called ‘ Yahoo Yahoo’-Eldee

We must take a stand against all forms of slavery- Eldee