Kimani who has been under fire for slamming Tiwa Savage in her own version of #Fvckyouchallenge made this known during a tweet chat on Twitter.

When asked why female artistes need to inject a bit of sex appeal in their songs in order to succeed, she said: ”I think now thanks to social media, a lot of people are more accepting of lifestyles and body shapes, they are beginning to open their minds up and bully less. But generally I have heard that your male fans have to visualize having sex with you”. 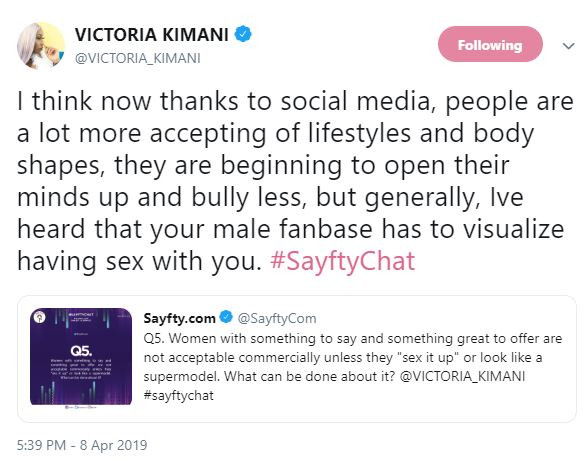 Speaking further, the sexy singer lamented over the need for more women to support one another in entertainment.

In her words: ”Queen behavior!! We know who they are by their Actions! I have met some wonderful women that uplift one another here in AFRICA and it’s so beautiful to see !Many times you will see a line-up of 10 males performing and 1-2 females on the same bill …. pushing the idea that there can only be “one girl in the palace” …. is pathetic Absolutely! The presence of one woman will not dull the presence of another”. My love life is dead; I am not dating anyone- Victoria…

Everybody knows Tiwa Savage doesn’t like performing in the…