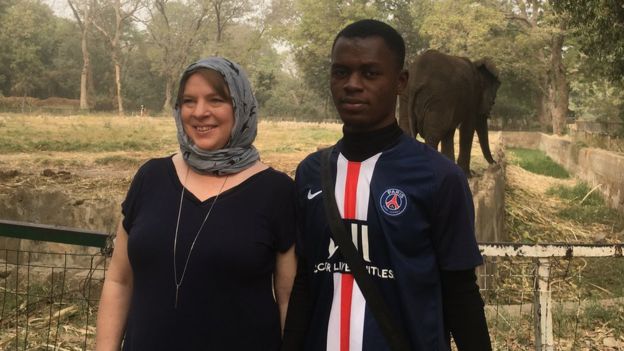 Sulaiman Babayero Isa, a 26-year-old Nigerian has stated that he cannot love a woman from his country of origin again after his experience with Jeanine Delsky, his 46-year-old lover from the United States.

Isa and Delsky recently created a stir when the latter touched down at Kano airport last week to finally meet the Nigerian whom she met on Instagram — a year ago — to conclude plans for their marriage.

The two love birds would then depart Nigeria for America, where they hope to start a new family, after their marriage expected to take place around March.

Kano-born Isa, who already appeared overwhelmed by the growing affection between them, said he cannot marry a Nigerian woman again.

According to him, Nigerian women do not understand the basics of true love, noting their love is often tied to perceived benefits in the man they want to marry or be in a relationship with.

“The truth is that our women don’t know what true love means, it is either they see something or they have plans of getting something from you. But if a white woman boldly tells you she loves you, she means it from the depth of her heart,” he said.

Isa, a fresh secondary school graduate and a barber, stated he was afraid after being invited by operatives of the Department of State Services (DSS) and hisbah, following media reports on his relationship with Delsky.

He however, stated his fears disappeared upon discovering that such invitation was merely to advise him and not to grill him as early anticipated.

He went on to explain how the love journey between the two started, stressing the relationship between them shows true love still exists on social media. Isa also urged others to also try their luck. “We met after I started to follow her on Instagram and started liking her pictures whenever she makes a post. After a while, I discovered some Yahoo boys were trying to swindle her,” he said.

“Sensing this, I sent her a message, telling her to ignore them and that got her attracted to me and she immediately considered me to be an honest person. That was her first attraction to me.

“This was followed by frequent chats, video calls and all that which accumulated to the present bond between us now.”

Isa noted that since Delsky arrived Kano to meet his family, the two had not passed the night in a room, adding his family has approved of the marriage between them.

“We don’t sleep in the same room. I do stay with her till night before I tell her good night. People have even started to complain about our open display of affection for another such as holding hands and hugging each other. So imagine what now happens when we start sleeping together in the same room,” he said.

“After our wedding coming up by March by God’s grace, we are heading for the US immediately where I intend to get a job and continue my school because I only had my secondary education. I also hope to get a football team which I can play for.”

Expressing how he feels finally meeting with Isa, the mother of two expressed her happiness visiting Africa for the first time and the fact that his family has agreed to the union.

“I have met his family members, more than 100 of them and I am happy they have all agreed that we can get married. Many of them are yet to see a white woman before, so they do play with my hair and sometimes touch my hand,” she said.