How Gov. Okowa saved communities attacked by herdsmen from invasion by military 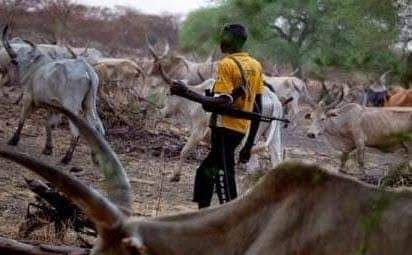 The Uwheru Development Union (UDU) has said if not for the intervention of Delta State Governor Ifeanyi Okowa, military men would have invaded the Uwheru kingdom, following attacks on the kingdom that claimed 10 lives and left many injured.

TheNewsGuru.com (TNG) recalls on 13th, 14th and 15th February, 2020, the entire Uwheru kingdom was thrown into mourning as a result of the mayhem unleashed innocent citizenry by armed herdsmen, leaving 10 persons brutally murdered and several others sustaining various degrees of injuries.

Rising from a stakeholders’ meeting presided over by the President General of Uwheru Development Union (worldwide), Cassidy Akpedafe, the people of Uwheru has sent a letter of appreciation to Governor Okowa for what they described as timely intervention that saved lives.

“The kingdom appreciates the timely intervention of the State Governor, Senator Dr Ifeanyi Okowa, particularly on Saturday 15th February, 2020 when it was obvious that the military was about to launch further attack on Uwheru communities. But for this intervention, the Odi Saga would have been a child’s play.

“Recall still, that in 2019, 6 (six) indigenes of the kingdom were also sent to their untimely graves by the killer headsmen. Suffice to state that these bloody attacks have been an annual evil ritual by herders with the death rate rising by the day.

“Attempts to seek the intervention and protection of relevant agencies have always been treated with levity hence the continuous invasion of the kingdom’s agrarian communities,” a resolution of emergency meeting by UDU read.

Earlier, the Uwheru kingdom has banned and tabooed the sale, purchase and consumption of cow meat, stressing that no such meat shall be served in any social gatherings, be it burials, marriages, birthdays, etc.

UDU resolved that the killer Fulani Herdsmen MUST LEAVE the breath and length of Uwheru kingdom immediately, and called on the Delta State House of Assembly to revisit and enact the anti-grazing law without further delay.

UDU also called on the military (Army in particular) and other security agencies to remain neutral, and protect the lives of the people from unprovoked attacks.

“The military must NOT be seen as giving cover to the Fulani herdsmen who are already armed. The Federal Government through her relevant agencies [should] come to the aid of the victims of the dastardly attack,” the resolution read.

Meanwhile, the outcome of investigations by the Delta Police Command on the killings is still being expected.

“We are investigating the matter because they alleged that the bodies were those killed during the herders/farmers clash in Uwheru.

“It is the investigation that will tell us who killed them; who buried them; when they were buried, who exhumed them and what have you.

“If we discover that there are some criminals who come here under the guise of herders or farmers to foment trouble, we shall deal with them ruthlessly,” the State Commissioner of Police (CP), Hafiz Inuwa, disclosed this to newsmen in Warri, Delta.

He said that the command had been relating with the committee constituted by Gov. Ifeanyi Okowa on the herders/farmers interface to ensure peace in the state.

He recalled that the police had earlier issued a statement that there was no death during the clash.

“I still stand by what I said then that we did not recover any corpse. It is what we see that we will report. There was no recovery of any corpse on the first day of the clash.

“But I am admitting these six corpses, because they were brought to us by people who said they exhumed them from the communities where the clash took place,” he said.

A reliable source in the community said that a team of security personnel and members of the community discovered the shallow grave on Monday, while searching for the bodies of the victims.

In addition, Governor Okowa has urged the Federal Government to give the direction on what should be done to properly check the menace of criminally-minded herdsmen I’m the State.

The Governor made the call on Monday in Asaba while presenting 35 pickup vans to security agencies in the state.

He condemned the brazen attitude of the herdsmen who usually invaded communities and attempted to take them over or took their cows into people’s farms for grazing, wielding AK 47 rifles.

He said that with strong statements from the Federal Government, security agencies would know what to do.

According to Okowa,  as it concerns herdsmen menace, on the part of the Federal Government, a lot needs to be done; we need strong statements on what should be done for the security agencies to further do their work.

He said “if you are going into any particular place, it is only just fair that you don’t walk into a community and  seize the place, that is not right, and for anybody carrying arms in the name of being a herdsmen, it is obviously wrong.

“They are not licensed to carry arms, not to talk of AK 47 assault rifles, and anyone seen carrying arms is a criminal.

“Beyond those that carry arms, you don’t walk into a farm and begin to graze on it, that is not the way it should be; so, there are a whole lot of issues and we need strong voice from the federal authorities which will assist the security agencies.

“In this state, we will continue to do the best that we can. A lot of criminals have been apprehended and one thing that we have said is that we are not giving any land for settlement.

“So, we need to continue to work hard and to liaise with other state governments in the South-South and at the national level to ensure that we are able to achieve a more conducive environment for investments to take place.”

He commended the security agencies in the state and urged them to continue to do more, particularly during this dry season.

The governor stated that there was need to find ways to curtail the criminalities involved in cattle-rearing, noting, however, that people were aware that some herdsmen were civil in their approach.

“We are also aware that there are Hausa/Fulanis who have been in Delta for decades, but the criminal elements who are out to maim our people must be apprehended.

“This will enable us and those who have been settlers over several years in this state to continue to be at peace with each other.

“It is on this note that I will formally handover the vehicles to security agencies realizing that as the years go by the various vehicles that they have begins to wear out.

“We thought that it was necessary to begin a process of replacement to improve on their ability to move from one point to the other and today, for a start we are going to give 35 pick up vans for the various security outfits and we hope that we can add a few more in the next few weeks.

“I want to use this opportunity to appreciate what they have been doing because, I do know that we have some security challenges and we know that the incidence of criminal activities have grossly reduced in the last few months.

“I want to urge that the partnership between the security agencies must continue to be strengthened; there is a need for us to continue to share intelligence and to work together as a team because that will definitely help us to further achieve peace in this state,” he said.

In a brief remark, the Commissioner of Police said, “this is a testimony to show that the  governor cares for the security of lives in Delta as these vehicles will boost security in the state and I want to assure you that the vehicles will be fully utilised.”