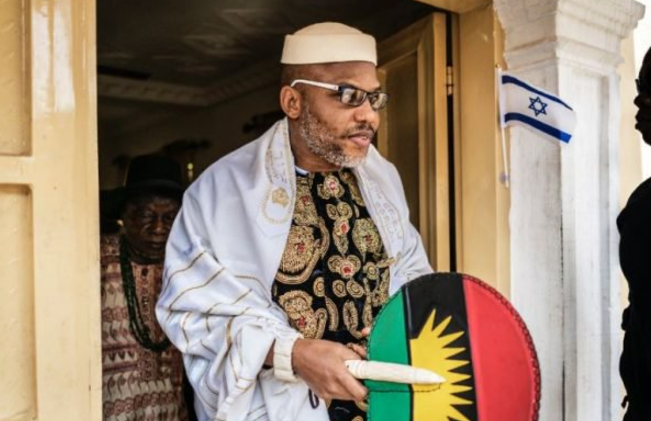 Following the recent modus operandi deployed by the Indigenous People of Biafra (IPOB) in foreign countries, the Concerned Citizens Forum (CCF) has alerted the United States, United Kingdom and other nations to be wary of the terrorist group.

IPOB’s nefariousness reached an all-new low when they attacked immediate past Senate President Ike Ekweremadu in Germany and even threatened to inflict similar ordeal on President Muhammadu Buhari in Japan.

In a letter addressed by National President, Princess Ajibola and addressed to the US’ Ambassador to Nigeria, W. Stuart Symington, dated Monday 26th August, the CCF warned of an impending terrorist movement if not properly checked in the US and other nations.

The concerned citizens reminded these countries that IPOB is a terrorist group in Nigeria, with a long history of intolerance, violent protests, disregard for constitutional authorities and bloodshed.

According to the group, if proactive steps are not taken, IPOB could escalate to another Al-Qaeda terrorist group of some sort, wreaking havoc across the world.

These concerned Nigerians, therefore, advised the United States, the United Kingdom and other countries to forthwith outlaw the group to ensure the safety of its citizens as well as foreigners, especially Nigerians.

Below is the full letter

The Concerned Citizens of Forum wishes to bring to the attention of the United States of America the recent threats posed by members of the Indigenous People of Biafra (IPOB) as evident in the attack of a member of the National Assembly in Germany.

The attack and the subsequent threats issued by the leader of the terrorist group Nnamdi Kanu calls for concern from all critical stakeholders devoted to the entrenchment of peace all over the world.

The Ambassador may wish to recall that the nefarious activities of IPOB in Nigeria have led to deaths of innocent people, amongst whom are women and children. Save for the timely intervention of the Nigerian Security Agencies, Nigeria would have been engulfed in crisis by IPOB, whose main motive was to cause the disintegration of Nigeria.

The Ambassador may also wish to recall that the Nigerian authorities indeed made it clear that the activities of IPOB in Nigeria were with the active support of some terrorist network around the world.

In Nigeria, IPOB has attempted to constitute itself into a parallel government. It has continuously instigated the people against the constituted authorities through hate speeches, organization of violent protests, attacking security agents, subjecting innocent people to torture and a flagrant disregard for the Constitution of the Federal Republic of Nigeria.

Dear Ambassador, IPOB is by every inch a terrorist organization that operates terrorist cells covertly in many countries of the world, including the United States of America. This much has been stated by the leader of the group Nnamdi Kanu who is standing trial in court for terrorism-related offences in Nigeria, and he jumped bail.

Dear Ambassador, IPOB, as a terrorist organization has carried on with recklessness. They have killed, maimed, and harassed innocent people going about their normal businesses. They have also tagged those that do not share in their ideology as imbeciles and gorillas. They have attacked critical government infrastructures intending to cripple the Nigerian economy. They have buried people killed in shallow graves. They have also vowed that Nigeria and indeed Nigerians would be attacked anywhere in the world. This much can be seen in the recent attack of a high ranking member of the legislative arm of government in Nigeria who escaped death by the whiskers in Germany.

IPOB has been indicted in Nigeria as aligning with foreign forces to cause political unrest in Nigeria. They have infiltrated young boys and girls with their ideology. They have also promised monetary rewards for information on the travel plans of governors and other high ranking government officials to attack them just like they did with Senator Ike Ekweremadu in Germany.

The Concerned Citizens Forum is consequently alarmed that if urgent and proactive steps are not taken to curtail the terrorist activities of IPOB around the world, the world might be faced with another Al-Qaeda terrorist group in the making.

This is especially so given the fact that the leader of IPOB has openly admitted that IPOB will continue to attack Igbo politicians, anywhere they go to in Canada, Germany, Australia, US, and the UK. This is also aside from the recent threat issued by IPOB to President Muhammadu Buhari who recently travelled to Japan.

Dear Ambassador, the threat posed by IPOB to world peace is glaring, and as such, it is required that all necessary measures be activated to curtail their nefarious activities in the interest of peace and tranquillity.

The safety of Nigerians and other innocent citizens of the world will be guaranteed if the United States of America begins the process of outlawing IPOB and its accomplices in the United States.

This is on the heels that intelligence reports indicate that IPOB has a strong base in the United States of America from where it coordinates its terrorist activities around the world.

Dear Ambassador, the Concerned Citizens Forum is constrained to write you this letter in an attempt to bring to your notice of the threat posed by IPOB and as well as to remind the government of the United States of America of its role in the entrenchment of peace all over the world.

It is our firm belief that the United States of America would act fast in this regards before IPOB constitutes a threat to the world. Don’t attempt traveling out of Nigeria if you owe…