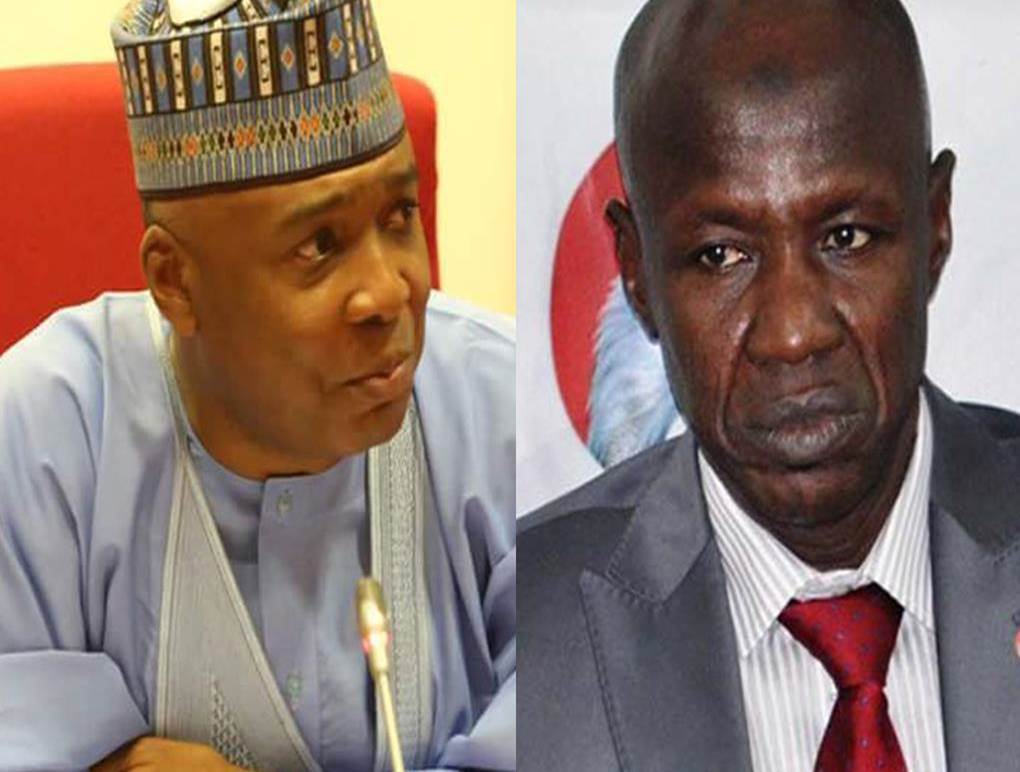 Oodua United Assembly,a socio-political self-determination group has said the reason the chairman of the Economic and Financial Crimes Commission (EFCC), Ibrahim Magu was after Senate President Bukola Saraki was because he wanted to conscript him into Senator Ali Ndume’s bid for senate presidency in the 9th assembly.

The group made up of Yoruba self determination youths was also worried about President Muhammadu Buhari’s seeming aloofness to some of the serious issues currently dotting the polity, said the current situation was unhealthy and portended great harm for the anti-graft war of the administration.

In a statement by its leader, Comrade Folorunsho Olalekan, the group argued that the signs had been there that Magu had descended into the Arena, to the extent that many had asked the president to call him to order, but contended that Magu has been further emboldened, because of the president’s aloofness.

Buttressing the point that Magu has fully dabbled into the race for the leadership of the senate and using the instrument of his office to harass potential stumbling blocks on the way of his candidate, Ndume, the group said the impetus with which Magu has approached the matter would not only destroy the EFCC but also make a mess of the anti-graft war.

“About two weeks, the EFCC invited the Deputy Senate President, Senator Ike Ekweremadu to its office for questioning on some of their usual trumped up charges and having waited since morning till about evening, he said he was tired and wanted to go home. But they refused to let him go except he signs certain undertaking.

“But while this argument subsisted, somebody walked in. Lo and behold, it was Ndume, apparently planned as a coincidence. Sighting Ekweremadu, he started acting as though he was genuinely concerned, querying why they kept him there for that long.

“To cut a long story short, Ndume alone signed N1 billion bail bond for Ekweremadu without much ado. Technically, the DSP is now indebted to him hence he is leading the campaign for Ndume’s aspiration. Magu has done same to Senator Stella Oodua, who is also canvassing for Ndume.

“But because they hold the view that regardless of his current status, Saraki still carries some weight in the senate, Magu is desperately molesting and harassing him just to toe the path of his candidate for the office of the Senate president, sadly, against a candidate generally considered the choice of the president.

“Therefore, if the president thinks staying
aloof in a matter as sensitive as this is a strategy, then, this matter needs no further debate. But Magu’s recent disposition has done something for everyone; it has vindicated the Department of State Services, which wrote two different reports at two different times saying Magu lacked the capacity and credibility to hold that office. “This is why we are calling on the president to put Magu in his place. He has outstepped his boundary by stepping into the race for senate presidency and harassing people just, because he wants to make his choice candidate the senate president. This is not an assignment from the presidency, but a personal errand that clearly conflicts the interest of the presidency,” the group stated.

The group therefore asked the EFCC to leave Saraki alone as it has failed to disabuse the minds of the people that his chase after Saraki was not personal.

“This is why we say to Magu, enough of this harassment of Saraki. Some of Saraki’s houses the commission just marked for seizure were the same houses that the Supreme Court had cleared the senate president for.

Whatever Magu is looking for again, the senate president needs to approach the courts to seek legal protection from agents of state running personal errands on the strength of their office otherwise the state is fast failing.”