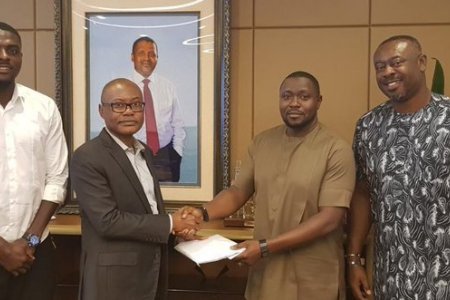 Business magnate, investor, and owner of the Dangote Group, Aliko Dangote on Wednesday fulfilled his $50K per goal pledge to the Super Eagles.

This was confirmed in a statement released by the Nigeria Football Federation (NFF).

This is coming after billionaire businessman Femi Otedola fulfilled his $25,000 per goal pledge to the Eagles on Monday.

Africa’s richest man and billionaire businessman Femi Otedola made the promise to the Eagles prior to their semi-final clash against the Algerians at the just concluded 2019 Africa Cup of Nations in Egypt.

However, the Super Eagles lost to the Algerians by 2-1.

The statement from NFF: “Business tycoon Aliko Dangote today in Lagos redeemed his pledge of $50,000 to the Super Eagles for their one goal against Algeria in AFCON 2019 semi-final. Money was presented by Olakunle Alake, GMD of Dangote Group accompanied by Anthony Chiejina, Chief Corp. Comm. Officer.”