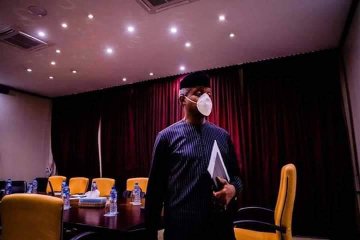 This was revealed on Wednesday in a Facebook post by Senator Babafemi Ojudu, Special Adviser to the President on political matters.

The VIce President has since being in isolation.

Osinbajo has had several contacts with Kyari since he returned from Germany on 14 March where he contracted the virus.

Meanwhile, the Minister of Power, Sale Mamman who accomapanied Kyari to Germany also tested negative for the virus.

The Minister had accompanied Kyari to Germany for the Nigerian-Siemens Electricity Project.

The federal ministry of power has been gripped with tension following the reports of Kyari’s positive test for Covid-19. Checks showed that many staff in the minister’s office were worried about their own state of health.

“I can confirm to you that the Minister tested negative.There is no cause for alarm”, a top source at the ministry hinted.

TNG reports that as at Wednesday morning total number of confirmed cases in Nigeria had swelled to 46 following the announcement of two new cases in Osun and Lagos by NCDC.

Lesbianism, bisexualism, others have no place in the Church, says newly presented Anglican Primate