UPDATED: Why we may reject 2019 presidential election results – PDP chairman 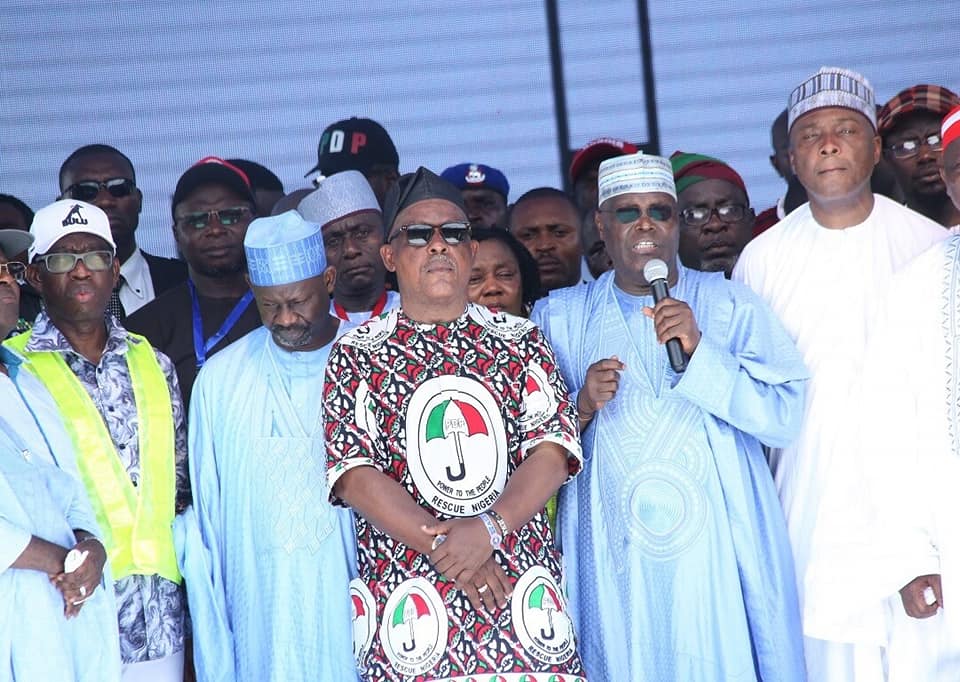 The Peoples Democratic Party, PDP, has rejected the results of just concluded Presidential and National Assembly elections being announced by the Independent National Electoral Commission, INEC.

The PDP National Chairman, Prince Uche Secondus who is currently addressing a press conference in Abuja, described the figures being announced by INEC as incorrect and totally unacceptable.

In the statement titled, ‘Our Democracy is Under Threat’ PDP appealed to the leadership of INEC to remain impartial and not become willing agents to disenfranchise our people and derail our democracy.

1. The Peoples Democratic Party (PDP) is forced to take a stand and make the following pronouncements at this crucial point because our democracy is under threat of derailment.

2. Firstly, I want to categorically state that our collation centers have all original results from every polling unit, in every ward, in every Local Government Area (LGA) in Nigeria, of which the international community is well aware, implying all results currently being announced by the Independent National Electoral Commission (INEC) is incorrect thus unacceptable to our party and people.

3. Secondly, officials of both President Buhari’s government and the All Progressive Congress (APC), working with INEC officers, have tried to alter the course of history and disenfranchise our people through the cancellation and manipulation of figures for results already announced at polling units, nationwide, in Local Government Areas (LGAs) where our party, the PDP, had commanding votes; this must now be resisted by every well meaning Nigerian.

4. Thirdly, the ruling party’s strategy has indeed been murderous, undignified, and disrespectful of the wishes of the electorate, our people and the international community who have been in solidarity with our nation as we attempt to strengthen our democracy and its institutions.

5. Fourthly, in full view of the watching world, and despite efforts by our great party and its agents to adhere to every laid down provision for the 2019 general elections, the APC in collusion with INEC have taken aggressive steps, mostly through inducements, manipulation and incarcerations, using the elements of state power including the Nigeria Police Force, the Nigerian Army in particular, alongside other organizations including the Department of State Security (DSS) and Economic and Financial Crimes Commission (EFCC) to silence the voices of our long suffering people; this is disheartening, considering the terms of the Peace Accord, which called for impartiality and non-partisanship by members of our security organization with constitutional roles to play during this civic exercise.

6. Fifthly, as results trickled in on the Sunday, February 24th, 2019, clearly putting the PDP in the lead, the ruling party and President Buhari dispatched high-ranking officials to coercively influence outcomes in different geopolitical zones in the country. For example:

7. With the INEC IT server hacked by agents of the APC to manipulate results, we can with certainty state that results from the following polling units have, for example, been tampered with, note:

8. As if these provocations are not enough, our agents and officials are constantly arrested and in many cases locked-up for complaining that Card Readers were not in use in many Northern states, implying that all results from the Northern part of the country where Card Readers were not used should be voided in accordance with INEC guidelines.

9. I also believe, the arrest of Eng. Buba Galadima, who has been a great symbol of what is courageous about our people goes to show that one man’s ambition is greater than our collective good, and most probably worth the blood of all Nigerians.

10. In that context, I call for Buba Galadima’s immediate and unconditional release, as well as that of all officials and agents of the PDP, in the Southwest, who were mostly arrested on the eve of the elections where intimidation became the APCs sole election strategy.

11. Despite these provocations, intimidation and attempts to hijack our democracy and change the course of history, I must, in fact, convey to our good people the fact that the PDP is on course to victory and the Presidency; therefore, remain resolute and steadfast, because our party shares in your uncertainty and suffering, which must decisively come to a good end for us all.

12. Finally, and once again, we appeal to the leadership of INEC to remain impartial and not become willing agents to disenfranchise our people and derail our democracy, because the world is watching, and history will indeed pass judgment.