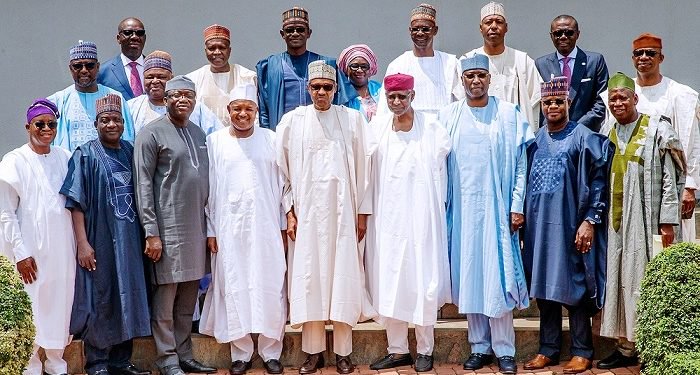 President Muhammadu Buhari on Tuesday in Daura held a closed door meeting with Progressive Governors from the ruling All Progressive Congress (APC).

The Secretary to the Government of the Federation, Boss Mustapha was also in attendance.

The governors came in two batches with the first including Governors of Ekiti, Lagos, Edo, Gombe, Kebbi, Katsina, Osun and Nassarawa States.

The remaining batch of governors came in through Kano in the company of Governor Umar Ganduje.

Covid-19: PMB As The Man Who Saw Tomorrow…

On arrival, the Governors paid Salah Homage to Buhari and prayed for good health and many more years of active service to the nation.

Buhari expressed gratitude for the Salah homage and thanked the governors for the visit.

The meeting later went into closed door session with no statement issued at its end.

The Governors were later escorted back to Umar Musa Yar’adua Airport for their departure to various destinations by Governor Masari and his Deputy Mannir Yakubu.

In a related development, President Buhari is expected to visit Batsari town, notorious for banditry attacks and kidnapping on Wednesday to see things for himself and visit the IDP camps.

He is also expected to commission some road projects executed by the State Government before returning to Daura same day.