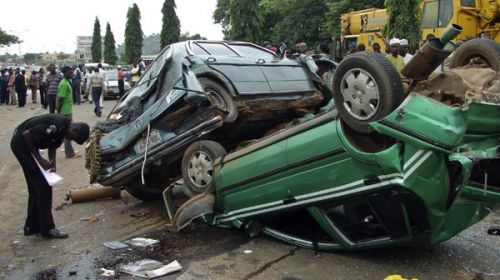 The police command in Ebonyi has confirmed the death of a man and his wife in a fatal road crash which involved Chief Hycinth Ikpor, the state Universal Basic Education Board (UBEB) Chairman.

ASP Loveth Odah, the command’s PRO, told the News Agency of Nigeria on Wednesday that the accident occurred on March 15 at Amudo, Ezza South Local Government Area (LGA) of the state.

Odah said that the UBEB chairman’s vehicle hit and killed the man and his wife riding a motorcycle and that the police was investigating the matter.

“The UBEB Chairman’s driver is still in custody while the affected vehicle has been impounded.

“The matter has however been taken to court and came for mention on Wednesday because the incident claimed human lives,” she said.

The PPRO noted that the police was aware that the UBEB chairman had been dialoguing with the family of the victims to settle the issue, but he said the arrangement did not concern the police.

“Such arrangement is a private concern of the parties involved, but the police have the responsibility of prosecuting cases involving human lives.

“The matter could have been treated mildly if it involved only injuries and other forms of discomfort but in this case, the law must take its course,” she said.

Ikpor, the UBEB Chairman told NAN in an interview that the accident occurred while he was on inspection tour of some schools in the state.

“My driver unfortunately hit and killed the man who was riding a motorcycle with one of his wives. “I have been dialoguing with the deceased’s family since then but the problem is that they are demanding for an outrageous sum of money for the burial,” he said.

Ikpor noted that the family was demanding N3.2million for the burial of the deceased persons while he agreed to offer N2million and contribute in the education of their children.

“We have adjourned meeting on the issue and I am not surprised that the police took the matter to court.

“The DPO, Onueke Police Division where the matter is being handled told me that it was taken to court because negotiation between me and the deceased family was being prolonged.

“The police could not wait for the negotiation to be concluded and I am more pained because the deceased was a member of my party, the Peoples Democratic Party (PDP)”, he said.