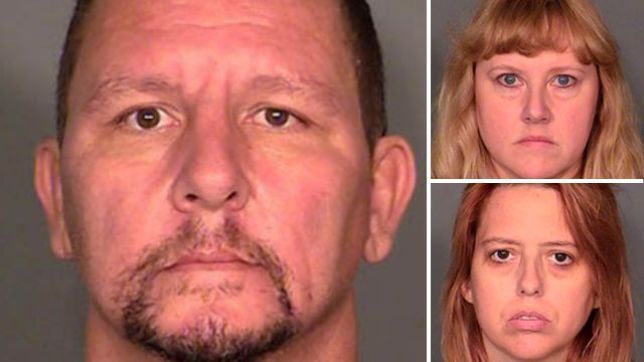 A father who spent 12 years forcing his children to have sex with him, his wife, ex-wife and the family dog was jailed for 341 years.

52-year-old Christopher Sena was handed 60 life terms on Tuesday after he targeted eight immediate family members and close relatives, then filmed the abuse.

Sena, of Las Vegas, made his victims, who were both male and female, have sex with him, their mother and stepmother while being filmed.

Judge William Kephart told the court that only a sentence stretching ‘hundreds’ of years would suffice for Sena’s ‘highly selfish’ and ‘very perverted’ behaviour, which saw him convicted of 95 sex crimes.

According to the Las Vegas Review-Journal, he added: ‘I’m ashamed that it had to come out of the city that I love.’

Sena was convicted in February, with prosecutor James Sweetin telling the court: ‘We know who he is because he’s demonstrated who he is over a decade.

The horrific abuse was finally uncovered in September 2014 during a SWAT raid at Sena’s trailer in Nellis Air Force Base.

Both women took plea deals which saw them handed a single life sentence for allowing the abuse to happen, and will be eligible for parole in 10 years.

Before Sena’s arrest, he regularly posted about his love for his family on Facebook.

He spoke of his son learning a ‘valuable lesson’ after being made to clean up the family’s home after making a mess, and said he and Deborah ‘make the best couple in the world.’

I eat criticism for breakfast – Ibrahimovic