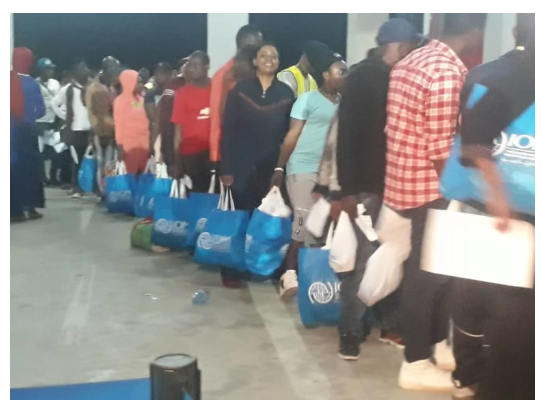 The National Emergency Management Agency (NEMA) has received another batch of 153 stranded Nigerians from Libya.

The Director-General of NEMA, Mr Mustapha Maihajja, represented by Mr Slaku Lugard, an official of the agency, received the returnees on Wednesday in Lagos.

Maihajja said that the Nigerians arrived in the Cargo Wing of the Murtala Muhammed International Airport, Lagos, at about 3:45a.m.

According to him, the returnees are brought via Al Buraq Air Boeing 737 aircraft with flight number UZ 189 and registration number 5A-DMG.

He said that the Nigerians were brought by the International Organisation for Migration (IOM) and European Union on the platform of the Assisted Voluntary Returnees (AVR) Programme.

News Agency of Nigeria (NAN) reports that other agencies which received the returnees included the Nigeria Immigration Service and the National Agency for the Prohibition of Trafficking in Persons.

Others were the Federal Airports Authority of Nigeria (FAAN) and the Edo Task Force on Anti-Trafficking.

In July 2018, NEMA announced that it received a batch of 160 Assisted Voluntary Returnees from Libya who were stranded in failed attempts to reach different European countries.