LIFT YOUR GAZE (Between Ngige, Obi and Sir M. I. Okpara), Patrick Okigbo 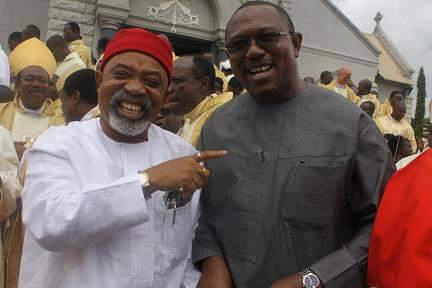 Supporters of Peter Obi and Chris Ngige are locked in a battle, in cyberspace, over who was a better Governor of Anambra state. Their yardstick for measuring performance is not how many people were lifted out of poverty or which of these men attracted more investment to the state; rather, shamefully, it is about who constructed more roads while in office.

Do you know how pathetic this debate is? Let me tell you.

Both of these men were governors during one of Nigeria’s longest “oil boom”. They each got billions of Naira every month to run a state of about 5 million people and total land mass of about 4,844 square kilometers (or 1,870 square miles). If you are like most people, you may have a hard time visualizing the land area. Let’s just say that, on a good day, it will take you less than 4 hours to drive from the farthest point north of the state to the farthest point south. You get the point? It is a small state.

Let’s put the performance of these governors in perspective by reaching back, 50 years, to compare their achievements to those of my man-crush, Dr. M. I. Okpara.

Michael Iheonukara Okpara was Premier of Eastern Nigeria between 1960 and 1966. The region comprised of 9 states in today’s Nigeria: the 5 states in the South East region (Abia, Anambra, Enugu, Ebonyi, and Imo) and 4 states in the South South region (Akwa Ibom, Bayelsa, Cross River, and Rivers). At 74,145 square kilometers (or 29,000 square miles), Eastern Nigeria is about 15 times the size of Anambra state. The population in 1965 was about 12 million people (or about 2.5 times the current population of Anambra State). In 6 years, Okpara brought so much development to the region that Pius Okigbo (in his 1987 book, Okparanomics: The Economic and Social Philosophy of Michael Okpara) stated that “It is his road network that carried Biafra through the civil war”. Some of those roads are still in use today.

You are probably thinking that M. I. must have had access to a lot of resources, right? Wrong. Okpara’s development of the region was financed from proceeds of oil. No! Not crude oil. Palm oil. As at 1963, Nigeria’s total export of palm oil and kernels was £30.2 million (or N60.4 million). These products were contributed by both the Eastern and Western regions; while the former dominated the palm oil trade, the latter dominated the palm kernel trade. Okpara also relied on the proceeds of cocoa and rubber which became more relevant to the economy of Eastern Nigeria under his Premiership.

For easy maths, let’s assume that Okpara had to work with about £15 million in the 9 states (or less than £2 million per state). Today, Anambra state alone receives about N60 billion (or £138 million) per annum from just the allocations from the Federal Government of Nigeria. This amount does not included other internally generated revenues. You can see that Chris Ngige and Peter Obi received multiples of what M. I. Okpara did; yet, all their internet warriors can point to, as achievements, are roads.

Sit back and read a short list of what M. I. Okpara achieved with far less financial and human resources. Bear in mind that Okpara was Premier for just 6 years while Chris Ngige and Peter Obi spent a combined total of 11 years: 3 years for the former and 8 years for the latter.

+ Okpara’s government supported the establishment of rice milling facilities in Abakaliki, funded from both public and private investments. By 1965 (after 5 years in office), Abakaliki became the main rice centre in Nigeria, milling rice brought in from Benue and far-away Sokoto, and exported the value-added product to Dahomey (Benin), Togo, and Ghana.

+ By 1962 (after 2 years in office), Eastern Nigeria produced more eggs than it could consume. This is because, realizing that the region had some disadvantages with raising cattle, Okpara accepted assistance from USAID to get the region to lead on poultry and piggery production.

+ His government introduced higher yielding varieties of oil palm and encouraged the replacement of the old stock in the plantations. This feat was accomplished on public and private accounts. Chief L. N. Obioha’s NIPROC (that exported oil kernel and value added oil palm products to Liverpool and the rest of the world) is testament to this public-private partnership.

+ Back in the early 1960s, Okpara’s government established two industrial layouts: Trans-Amadi in Port Harcourt and Emene in Enugu. No government in Anambra state (past and present) has been able to build one … just one … additional layout despite access to proceeds of crude oil sales.

+ His government encouraged private investors to build factories for interior materials such as foams, mattresses, metal and wooden furniture, etc.

+ Realizing the need for refreshment (after all, “man is not wood”), Okpara’s government invested in Golden Guinea Breweries located in Umuahia. The beer (by the same name) gave stiff competition to Star Beer and Guinness Stout. The government invested in a soft drink plant in Onitsha but the business failed.

+ He invested in a steel re-rolling mill in Emene

+ Many of Okpara’s development plans were interrupted by the Nigeria-Biafra Civil War. The government completed plans to build the Calabar Cement Company (CALCEMCO) before the war but could not move forward with it. Furthermore, in 1963, the consulting firm, Arthur D. Little of Boston completed a feasibility study for the establishment of a petrochemicals plant in the region but work on the plant was interrupted by the war. Similarly, an Israeli team was engaged to develop a plan for a water scheme for the rural communities in the region but their work was also interrupted by the war. Fifty years after the war, Anambra state (one of the nine states under Okpara’s administration) does not have pipe borne water in its capital, nor in any of its major cities. No one is even thinking of such “blessing” for the rural communities. Half a century later.

A review of this short list of projects explains the frustration one feels when the economic debates of 2019 are about the number of kilometers of roads built by a governor. It is really a testament to how low we have fallen as a people. The fact that we have to go back over half a century to remind ourselves that we can do better is evidence that we are a colossal failure.

My friend, Deji Fisho, was right. We are a failed generation. We climbed on the shoulders of giants and instead of looking upwards, we cast our gaze downwards. We must realize that these rulers have dealt us a bad hand; they have made us (and our dreams) mediocre. We, who are sons of lions, are now foraging for grass. We, who were birthed by “amuma na egbeigwe” (thunder and lightening) have become like ice fish. It is time for a collective exclamation of “God forbid”.

Like M. I. Okpara, we must lift our gaze. We must proclaim that we are much greater than who they want us to believe we are. We are offsprings of thunder. We do big and difficult things.
—————
Washington D.C.
August 09, 2019