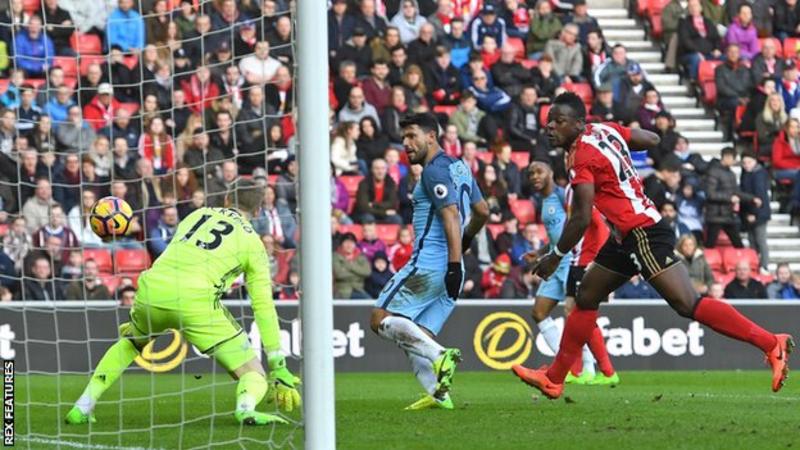 Sergio Aguero scored his fifth goal in his last three games to help Manchester City back into third place in the Premier League and keep Sunderland rooted to the bottom of the table.

The visitors then clicked into gear as David Silva fed the explosive Leroy Sane for the Germany winger to double their lead after the break.

Jermain Defoe did find the net in a rare Sunderland attack late on, but his header was ruled out for offside.

The result could have been more comfortable for City, but Sunderland keeper Jordan Pickford saved well from Aguero.

For all City’s possession, it was the hosts who threatened first, Defoe hitting the post with a bouncing effort from outside the box that had Willy Caballero beaten.

Fabio Borini headed wide from the rebound, and any hopes David Moyes’ side had of taking three points seemed to evaporate with that miss.

With Chelsea not in action until Monday, Manchester City took the chance to move within eight points of the runaway leaders with a confident performance at the Stadium of Light.

Pep Guardiola will hope this victory, and an earlier win for second–placed Tottenham, may see Antonio Conte’s side begin to feel the pressure.

It was a fourth league win on the trot for Guardiola’s outfit, who are building momentum and can continue to crank up the heat up on their title rivals when they face Stoke in a game in hand on Wednesday.

But they are fighting on three fronts, with this routine victory marking the start of five games in 15 days that include a Champions League last-16 second-leg trip to Monaco and a FA Cup quarter-final at Middlesbrough.

It is a problem Guardiola will welcome, but does the Spaniard’s squad have the depth to cope?

He made five changes to the side which thrashed Huddersfield 5-1 in midweek and could afford to drop Kevin de Bruyne for Silva, whose incisive passing helped unlock a resilient Sunderland. COVID-19:Full text of Buhari’s broadcast to the nation