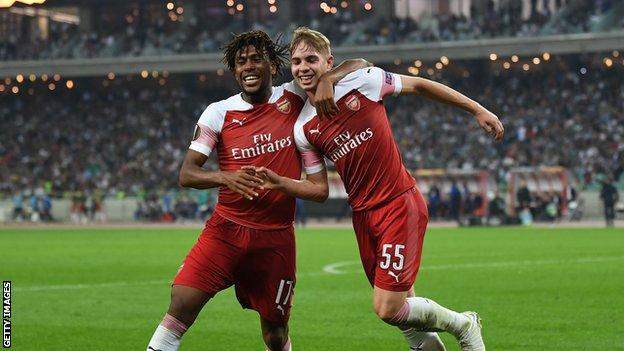 Teenager Emile Smith Rowe scored his first Arsenal goal to help the Gunners to an eighth win in a row with victory against Qarabag in the Europa League.

Sokratis Papastathopoulos and Matteo Guendouzi scored either side of Smith Rowe’s strike to also register their first goals for the club.

Sokratis, who joined from Borussia Dortmund in the summer, put the Gunners ahead in the fourth minute when he diverted Nacho Monreal’s header in at a corner.

Teenager Guendouzi, another summer signing, added the third in the 79th minute, finishing a slick move with a low shot into the bottom left corner.

Arsenal did not have all of the play in Baku and goalkeeper Bernd Leno had to make good saves in either half.

The Gunners top Group E with two wins from two games and they have now won eight consecutive games in all competitions for the first time since April 2015.