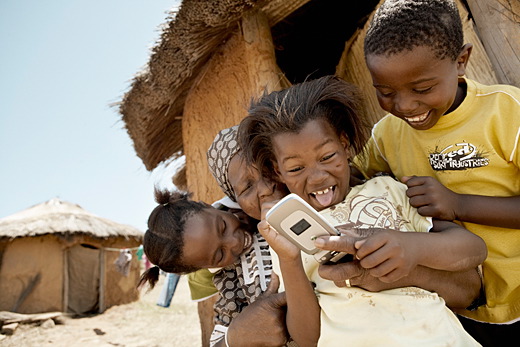 A recent survey conducted by Pew Research Centre has shown that 39% of Nigerians own a smartphone, 44% own a mobile phone that is not a smartphone and 17% have no mobile phone.

With an estimated population of 198,902,448 as of Wednesday, February 6, 2019, based on the latest United Nations estimates, according to worldometers, this means that over 33 million Nigerians are living without a mobile phone.

TNG gathered from Pew that more than 5 billion people globally have mobile devices, and of this number about 77 million Nigerians own a smartphone, and about 87 million own a mobile phone that is not a smartphone.

The education gap in internet use is an even wider 53 points: 65% of more-educated Nigerians use the internet compared with just 12% of those with lower levels of education.

The survey revealed that about as many Germans (44%) as Nigerians (45%) access social networking sites, despite smartphone ownership among Germans being twice as high as among Nigerians.

The survey listed Nigeria among nine countries where men are more likely to own smartphones than women. Other countries in the list are Canada, France, Hungary, the UK, Russia, India, Kenya and Mexico. It also noted that the gap in ownership is relatively small.

According to the survey, Nigeria, where smartphone ownership also differs substantially by gender, reported relatively large gender differences in social media use. In Nigeria, women are less likely than men to use social media sites.

According to Pew, the growth in mobile technology to date has not been equal, either across nations or within them.

“Smartphone ownership can vary widely by country, even across advanced economies. While around nine-in-ten or more South Koreans, Israelis and Dutch people own smartphones, ownership rates are closer to six-in-ten in other developed nations like Poland, Russia and Greece.

“In emerging economies, too, smartphone ownership rates vary substantially, from highs of 60% in South Africa and Brazil to just around four-in-ten in Indonesia, Kenya and Nigeria.

“Among the surveyed countries, ownership is lowest in India, where only 24% report having a smartphone,” Pew noted.

The researcher further noted that younger people in every country surveyed are much more likely to have smartphones, access the internet and use social media.

“In all of the advanced economies surveyed, large majorities under the age of 35 own a smartphone. In contrast, smartphone ownership among advanced economies’ older populations varies widely, ranging from just about a quarter of Russians 50 and older to about nine-in-ten older South Koreans,” Pew stated.

However, in many of these advanced economies, the age gap in smartphone ownership has been closing since 2015.

Two factors were attributed to the narrowing gap.

First, those under 35 were already very likely to own smartphones when asked in 2015, presenting a “ceiling” of sorts.

Whatsapp stops working on some smartphones…

For example, nine-in-ten or more Americans ages 34 and under have had a smartphone since 2015, while the ownership rate among the 50-and-older age group has risen from 53% to 67% over the same period.

In most emerging economies, however, patterns of smartphone ownership look quite different.

In these countries, ownership rates across all age groups tend to be lower than those seen in advanced economies.

For example, while majorities of adults ages 50 and older own smartphones in many advanced economies, in no emerging economy surveyed do smartphone ownership rates among this older group rise above 35%.

Further, in most emerging economies, the age gap in smartphone ownership has been growing in recent years.

Although the older age group is more likely to have phones now than they were a few years ago, the rate of adoption has been much faster among the younger age group.

Education and income level also play sizable roles when it comes to explaining differences in technological use in most countries.

In every country surveyed, better-educated and higher-income people are more likely to use the internet than people with lower levels of education or income.

And in nearly every country, the same is true of social media use. The education gaps in emerging economies are especially wide.

The education gap in internet use is an even wider 53 points: 65% of more-educated Nigerians use the internet compared with just 12% of those with lower levels of education.

In contrast, gender plays only a limited role in explaining differences in technological use in most countries.

Whether in advanced or emerging economies, men and women generally use technology – including smartphones, the internet and social media – at similar rates.

For example, the gender gap in smartphone ownership is usually in the mid-single digits, where gaps exist at all.

In Japan, for instance, 69% of men own smartphones compared with 63% of women.

And, in most countries, men and women have largely obtained smartphones at similar rates in recent years, meaning that the gender gap in usage has remained constant.

The notable exception to this pattern is India, where men (34%) are much more likely than women (15%) to own smartphones – a gap of 19 percentage points.

And India’s gender gap is growing: Today’s gap is 10 points wider than it was just five years ago (then, 16% of men and 7% of women owned smartphones).

Sure ways to charge your smartphone quicker